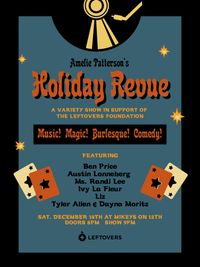 A portion from every ticket sold will go directly to the Leftovers Foundation, one of Canada’s largest, tech-enabled food rescue charities. They reshape how our communities fight poverty, reduce food waste, and save our environment. Tis the season for giving and spreading a little holiday cheer, featuring Live Music! Comedy! Burlesque! Magic!

Join singer-songwriter host Amelie Patterson as she presents some of her favourite entertainers in the west:

Liz (Music) “Liz is one of the brightest new talents on the Alberta music scene with an old soul approach to her writing that belies her age. Powerful vocals and lyrics that make you think. Liz is absolutely one to watch for!” — Cory Noel | Program Director, CABK Broadcasting

Ben Price (Magic) Price has been performing magic since he was six years old and has performed magic professionally for over a decade. Bens Magic has been seen by companies like Facebook, Google, Twitter, L’Oréal, Adobe, and More!

Tyler Allen & Dayne Moritz (Music) Hailing from Calgary, Tyler & Dayna (of the Red Hot Hayseeds) specialize in western/hot swing music of the 20's-50's, blending timeless classics with exciting originals that bring you back to the golden ages of western music

Austin Lonneberg (Comedy) Austin's comedy is unique, insightful and hilarious choosing to avoid well trodden territory in favor of blazing his own comedic trail, a trail that has led him to becoming one of Alberta's rising stars and to perform on the YYCOMEDY Festival, the Sled Island music and arts festival and to be featured on a Just For Laughs Originals album taping.

Ivy La Fleur (Burlesque) Songstress & Striptease Artist- Ivy La Fleur has left her mark entertaining crowd's from East to West. The sweetest of sweet, with the Sass to match- Ivy is a triple threat. Commonly known for her seductive nature, campy stage presence & well rounded character work. She can take any event to the next level. Based in Calgary, AB- Ivy La Fleur is a name in the Burlesque & Entertainment industry that you won't soon forget.

Miss Randi Lee (Burlesque) Miss Randi Lee is a fiercely seductive performer with fiery moves and an attitude to match. Inspired by traditional burlesque, with a flare for the contemporary, Miss Randi Lee brings her skill and experience to the stage. After learning the glittery ropes on the cabaret stages in glamourous London, UK, this professional spitfire now tantalizes audiences by creating unique performances with her signature intimate connections and up-close interactions.